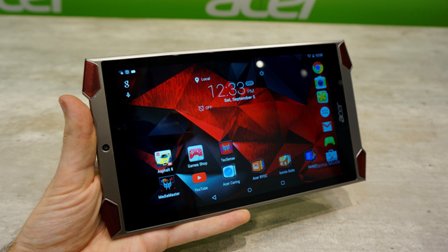 Do you have gaming running in your veins? If yes then you can go for Acer Predator 8 Gaming Tablet. This device is now available for Pre-order.  It will be pitched against the Nvidia’s Shield tablet.

You can pre order the Acer Predator 8 gaming device at Newegg. The gaming tablet is being offered at $299.

The tablet features an 8-inch IPS LCD screen with Full HD (1080 x 1920) resolution. The tablet has been devised with lightweight aluminium. The device has four speakers for virtual surround sound, which incorporates TacSense technology. Th tacSense technology will enable better gaming to its users.

Predator 8 rides on a 64-bit quad-core Atom x7-Z8700 chipset made on Intel’s Gen9 graphics architecture that delivers seamless gaming experience. Well,  The tablet is equipped with 2 GB of RAM. As for storage options, the tablet can be purchased in either 32 GB or 64 GB. You also have the option to expand the memory up to 128Gb via Micro SD card. Acer Predator 8 works on Android 5.1 Lollipop OS.

Users will get a 5 MP camera at the back. There is also a 2 MP secondary front facing camera.

Nvidia Shield Tablet tablet was launched last year. It is available if Wi-Fi and LTE variants.

The Nvidia tablet comes with a 8.00-inch display with a resolution of 1920 pixels by 1200 pixels . Well, the display screen size is same as that of the Acer predator. The Nvidia tablet has more thickness and weight compared to the Acer Predator 8.

You will have  32GB of inbuilt storage, which can be expanded up to 128GB via a microSD card.

Unlike the Acer Predator 8, the Nvidia Shield Tablet sports a 5-megapixel camera, both on the front and at the back.

One thing about Nvidia Tablet we would like to share is that it consumes a lot of battery quickly. It is a major drawback in the device.

We have listed the major differences between the two gaming tablets. The Nvidia Tablet is currently ruling the hearts of the gaming lovers. Can Acer Predator 8 steal their heart away. We have to wait till experts come with their comments on the performance of the new device.