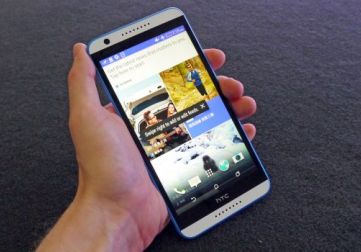 The HTC Desire 820 is equipped with 2 GB RAM. It sports  a 13-megapixel rear camera with LED flash and BSI sensor,the camera gets af/2.2 lens. You will also get an 8-megapixel secondary front selfie shooter. With a 8 MP front camera you can get high quality selfies. The Desire 820 includes Face Fusion software which allows users to merge their facial features with other people,  you get  real time Live Makeup, which gives users a preview and allows setting of desired level of skin smoothing before you capture an image . You also get Photo Booth with which you can capture several moments in a single image.

The Desire 816G on the other hand is almost similar to the Desire 816 which was launched in the month of April this year at 23,990 in India .  The new 816G smartphone does not feature LTE connectivity unlike the former version. It comes with a 1 GB RAM compared to 1.5 GB of Desire 816.

The dual-SIM Desire 816G also comes with a 1.3GHz quad-core MediaTek processor that is slower than the 1.6GHz quad-core Snapdragon 400 CPU of  Desire 816 . The two smartphones share all other  specifications including Android 4.4 (KitKat) with HTC Sense 6.0, 13-megapixel rear camera and a 5-megapixel front-facing camera, dual-front-facing BoomSound speakers, dual SIM support and 3G HSPA+ connectivity etc.This smartphone will be available in the month of October.

The two smartphones Desire 820 in India and HTC Desire 820q will be made released in the market from early November. The pricing of these smartphones has not been revealed yet .