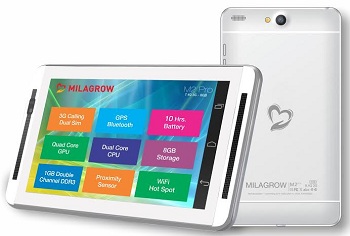 First of all, let’s take a look on the features and specs of the Milagro M2Pro 3G Call 8GB tablet. The tablet boasts of a 6.5″ screen with 800×480 pixels resolution. It’s powered by a 1.2GHz dual-core MediaTek (MT6572) (Cortex A7) CPU with additional support of 533MHz Mali 400 GPU and stands incorporated with 16GB RAM, 8GB of built-in memory and an expandable storage support of 32GB via a microSD card. Apart, the tablet features a 2MP rear camera with 0.3MP front-facing camera and packs a 3800mAh battery for considerably durable power performance. The tablet weighs around 230 grams and is available at an affordable cost  of Rs. 8,990.

The second in the category is the  Milagro M2Pro 3G Call 16GB tablet which sports a 7.9″ wide screen IPS display with 1024×768 pixels resolution and is powered by a 1.3GHz quad-core MediaTek (MT8382) (Cortex A7) processor. Further it supports a 533MHz Mali 400 GPU and packs 1GB RAM, 16GB in-built memory and expandable 32GB memory for storage purposes. Its camera credentials include 8MP rear cam with 2MP front camera. The tablet packs a 4000mAh battery, weighs 370 grams and is price at Rs. 17,990.

The last but not the least & the most powerful device in the tablet segment is the Milagrow M2Pro 3G Call 32GB tablet which features a dynamic 7.9″ IPS display with 1024×768 pixels resolution and is powered by a 1.6GHz quad-core Rockchip 3188 processor (Cortex A9) with additional support of Mali 400 GPU. For storage reasons the device supports 2GB of RAM, 32GB built-in memory which you can further extend up to 64GB via a microSD card. It’s camera credentials supports 8MP rear and 2MP front cam and the device weighs only 390 grams. For providing the users with long-lasting power back-up, the tablet packs a 4000 mAh battery and is available in the market at a noteworthy price tag of Rs. 21,990.

After taking a look on the differences of specs and features of the three variants, what you think guys? Is the three tablets worthy of cost or you think its too much for the given price and specs? Don’t forget to mention your valuable comments in the comment section.