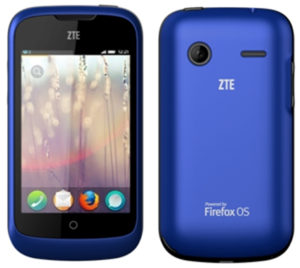 ZTE and Firefox joint together and launched a Smartphone named ZTE Open. This smartphone is a budget phone comes with first ever Firefox operating system for ZTE. However, Alcatel launched Firefox operated device, One Touch Fire for the first time and ZTE is second. Firefox is the most popular browser that is based on HTML5 and is advanced to make use of apps that runs on web. For shrewd interface of Facebook and twitter app, the Firefox OS is been integrated with.

Well, ZTE Open Firefox phone has 3.5 inches display with capacitive touch screen. That means now you can find the whole entertainment world in your fingre tips. Screen resolution of the device is about 480×320 pixles and thickness is 12.5 mm. Firefox operated device is powered by 1Gz Snapdragon S1 Processor and 256 MB of RAM. 1 GHz processor these days are very common and its minimum requirement because of higher updation.

For capturing photos and shooting videos the phone is having rear camera of 3.2 mega pixles and secondary camera absent. The camera focus is fixed and options available for photo editing. It is very disappointing that for web chatting and other features the front camera is missing. Anyway the device has 512 MB of internal memory and can expand it by using microSD card.

With this feature the data connectivity is must and for that the device features WiFi 802.11b/g/n. But, there is no information informed to the user about the phone coming with 3G or 2G. The suspense is still riding but the data sharing ability is reveled. Hence the device comes with Bluetooth 2.1 and AGPS. Above all the device battery is 1200mAH.

What you think about this smartphone? Users loving Firefox would go for it and what about you. If you are living in Spain, Colombia or Venezuela then you are lucky because the device will be available in market in Q2, 2013. We have limited information available here, so keep in touch with Blogzamana for more details.