How To Run Windows Applications In Non-Windows Platforms Are you sitting behind a Mac or a Linux? Do you multi-boot but want to open an urgent mail in Outlook or you’re amidst an intense compilation using GCC and can’t reboot? Or you’re just tired of rebooting for a simple task to be done? Or you are an ardent gamer and wanna enjoy the games available exclusively on your favourite beautiful desktop? Don’t worry. There’s an application called “Wine” that does this job for you. Have a look.

Yes “Wine”. I’m not joking and there’s no hallucination or alcohol here too. Though it might seem unbelievable to run an executable of one operating system in another but it’s possible. Wine is a recursive acronym for WINE Is Not Emulator. But technically (and generally too) it’s more or less an emulator that doesn’t emulate CPU calls but only system library calls. But, the integration it provides with your guest operating system is a really a figure to be noted in rhetoric. Wine makes your windows applications run in your Linux or Mac just like a native app withy full drag and drop and clipboard support. That’s why the developers brag about WINE being not an emulator.

Wine can be called as a compatibility layer for Windows applications that enables them to run on several POSIX-compliant operating systems, such as Linux, Mac OSX, and BSD. Instead of simulating entire internal Windows logic like the stuff performed in a a virtual machine or emulator, Wine simply translates Windows API calls into their POSIX counterparts on-the-fly, eliminating the performance and memory hits of other messy methods and allows you to cleanly integrate Windows applications into your desktop.

There comes a question why do we need wine? We all know that Microsoft Office shall never be ported to Linux. Similarly there are lots of other apps that won’t be either. And also the vice-versa is also true. If you wanna use both of them together you need to run them in one desktop. This is where WINE comes into use. Though there are alternatives to this approach. But they might not be practically feasible. They have their own inherent limitations that WINE does away with. The first, simplest and most obvious way is to multi-boot. But how justifiable is it to reboot every time you want to open a simple word processor? The second one is to use a virtual machine with all its performance hits. As well as the virtual machine is itself a separate “machine” which provides limited or no interoperability with the host. Just imagine the fuss while setting up a host to guest file sharing with bizarre configurations and drivers. Moreover, the confusion that can be created with two desktop screens, two taskbars with two set of windowing systems with no drag and drop or shared clipboard! For these reasons WINE is the best choice for running windows apps on POSIX compliant operating systems lust like first class citizens on your desktop. Here are some screenshots that will demonstrate this.

Tune Up Your PC – With Free and Simple Tools

The first one is Microsoft Office Powerpoint 2007 running under Wine 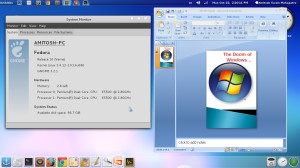 Now this is my favourite game, Counter Strike running under Wine in My Fedora 16 “Verne “(for game junkies it’s map : as_oilrig “Oilrig – Assassination”) Now here’s how to install Wine in your operating systems.

For other distros, head over to the WINE Downloads Page to know more. And for distros not listed (Arch Linux etc…), you can browse your distro’s software repositories for wine and get it from there.

Unfortunately, there’s no pre-build official binary package available for Macs available yet. Though there are some third-party builds available. To know more head over to the official WINE wiki for MacOSX.

Now that you have installed WINE, there is yet some more (little) configuration to do before you start running your apps. Though most of the apps run out-of-the-box, some don’t. Checkout the WINE post-install how-to for more details.

That’s it. You’re now ready to enjoy all your favourite windows games and apps on your favourite oprating system. Stay tuned to BlogZamana for more updates on latest software technologies.

How to fix Windows Red Screen of Death or RSoD : Here are the tips