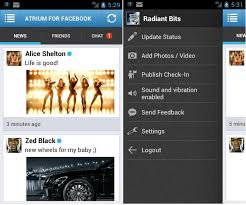 Mano Ya Namano, Facebook is now the best social networking site for every people on earth. If you do then apart from official Facebook app, we have found the fastest Facebook client for you. This Facebook client, “Atrium App” comes with a clean user interface and has amazing performance. Its cutting edge design pooled with blazing swift performance makes the app one of the best Facebook apps available for Android.

You will wonder what’s the need of Atrium if already the official Facebook is available for us! Then we must say, official Facebook is bit slow these days and apart there is slow processing in loading photos, feeds and technical difficulties while connecting through Google Play stores. But, this alternative android Facebook app called Atrium will solve all these problems all  at once.

The intuitive interface of facebooking on Atruim goes this way:

Recently the Atrium App in Google Play got updated to the version 1.2.0 with fixes and additions like:

If you know languages other than English then you can access Atrium in German, French, Italian, Portuguese, Spanish, Korean, Russian, and Ukrainian languages. Atrium is getting popular. Then what to wait for? Download this app for fastest use of Facebook and connect with friends easily and quickly. The app will require 2.6 MB free space to get downloaded.