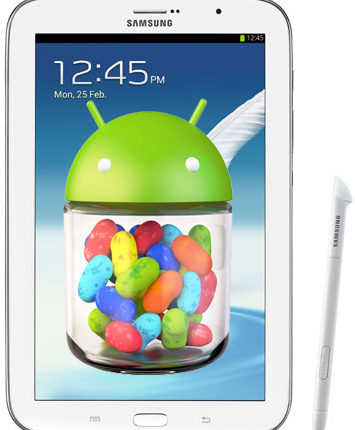 The Samsung Galaxy Note 8.0 device gets official Jellybean 4.1.2 update that is dubbed as XXBMC9. This update is brought you by Samsung and brings bug fixes, recovers from app crashes, battery heating issues and rear camera issues. Few minor user interface tweaks has been adopted to perform well. To get all these on your new device then follow the instruction and requirements given below.

First You must know about the device. Well Samsung Galaxy Note 8.0 is a phablet that comes in LTE model too according to market demand.

The screen measure 8 inches and has data connectivity seems very fast with 21 mbps. The device is equipped with Quad-core 1.6 GHz Cortex-A9 processor and chipset of Exynos 4412. The tablet is going to be available in market very soon but the device has been updated officially with Jellybean 4.1.2 with other model of its kind, N5110. If you get this model then do the update by following the article. This article will also help you if in future the device is bricked then applying the official update will unbrick the device.

The device holds 5 Mega Pixels camera with a screen resolution of 2592х1944 pixels. It has got autofocus features with Geo-tagging, touch focus, face detection, image stabilization. You can shoot videos and watch them in [email protected] It has got Secondary camera of 1.3 MP.

Caution: Note that this update hasn’t till reached few countries and if you live in any of that country then here is the manual update available though Odin. This won’t root your Galaxy Note rather revoke the access and you get back into the original stock ROM. Even the custom ROM also gets vanished after flashing of original ROM. It is the only best way to unbrick the device if it happens so.

Samsung Galaxy SL I9003 got Updated with Jellybean 4.1.2 Firmware