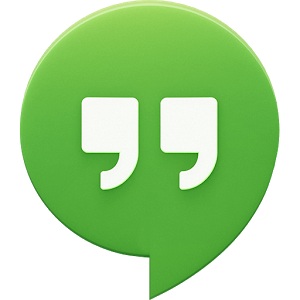 Seems the cold rivalry between Google and Apple will never end. Just a instance of the same have been witnessed recently. While Apple just of late launched the WiFi calling feature with few selected operators in the US, Google also moved a step ahead integrating the Voice calling facility in the Hangouts just the day before and now also comes with the much awaited visual refresh that is key subject matter of our discussion here. Then what’s special you find on this new Hangouts for Android? This new Hangouts for Android comes with much enhanced appearance and also showcases the email address that couldn’t be seen earlier when you synced your hangout with multiple accounts.

The new Hangout comes featured with round profile picture alternatives along with the novel greeny user Interface which is so simple to use. Besides, it comes accompanied with the quick access toolbar which is divided into two, a contact tab and a tab listing all your previous chats. This was the much required vibrancy the users were eagerly waiting for. Now you can switch between sections just by swiping through the tabs available as gestures and with this, Google has put a check to the Swipe to archive feature.

Well, this is all about the improvisation in the UI of the new Hangouts 2.3. But if you want to install the most recent Hangouts dialer, you can do so. It doesn’t come pre-installed. So you have to separately install it. But if you install it, then there will be three tabs instead of two. Since Dialer is not its own dedicated app, it hardly connects to the voice tab of hangout which is in-built in the app. As revealed in the support page of Google, when a user receives a voicemail massage, an unread notification appears at top of the hangouts list along with the voicemail icon in the massage. So the user can tap on the play icon to listen to this massage.

You can download this latest version of the Google hangouts app right from here. Using it is so simple. But in case you face any issues in using this app, then you can get back to us via the comment section. This app is also soon going to be updated in other Tabs and iOS devices.