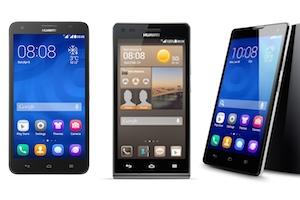 Huawei has launched three new Android smartphones -Honor 3C, Ascend G750, Ascend G6 in India and will be available through online retailers and at all leading mobile stores. Huawei Honor 3C is a dual-sim and dual stand smartphone. It has been priced at Rs 14,999. It uses Android 4.2 Jelly Bean operating system. It has a 1.3 GHz quad core processor and 2GB RAM. It has a 2300mAh battery and features Huawei’s Power Saving Technology. Huawei Honor3C sports a 5- inch 1280X720Pixel HD LTPS display which can be used under sunlight without any difficulty, it is a capacitive touch screen. LTPS display is a Low temperature Poly Silicon Display which enhances response and reduces the reflection.

This phone features a 8MP Sony BSI camera having glass filters, voice photography and image start engine options and a 5MP front camera with auto facial enhancement feature and a magic preview window. It has an internal storage space of 8 GB which can be expandable upto 32GB with a microSD. The connectivity features include Wi-Fi, Bluetooth 4.0,Micro USB,FM and GPS>

Huawei Ascend G6 is a single sim phone and is priced at Rs 16,999. It features a 4.5 inch capacitive touch screen having 540X960pixel HD display .It incorporates a 1.2 Ghz quad-core processor and 1 GB RAM . It has an internal storage space of 8GB. It uses Android 4.2 Jelly Bean operating system and also has a Huawei’s Emotion UI 2.0 skin. It has a 5MP front camera and a 8MP rear camera with a BSI sensor with LED flash. It has got some good connectivity features like GPS, 3G, FM, Bluetooth 4.0, NFC, Wi-Fi 802.11b/g/n etc.

Huawei Ascend G750 smartphone which comes with 1.7 Ghz octa-core processor and 2GB RAM. It is priced at Rs 24,990 and is available in deep black and pure white colour options. The phone has an internal storage space of 8GB which can be expandable. It sports a 5.5-inch capacitive touch screen with 720X1280pixel display. It has a 13MP rear camera with flash and a 5MP front camera. The smartphone has many connectivity options like Bluetooth 4.0, 3G, Wifi 802.11b/g/n, WI-Fi Direct and other sensors. It gets power from 3000mAh.

The all new Majesty S 125 from Yamaha