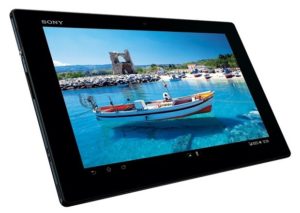 In CES 2013, Sony landed its waterproof Xperia Tablet Z. Sony Xperia T Smartphone was also got debut on CES along with the tablet. The device has 4G LTE connectivity and the details will be cleared when in upcoming Mobile World Congress 2013 held in Barcelona will showcase. New Xperia tablet Z comes with a pack of powerful, slim and sleek design.

The Sony Tablet Z is a 10.1 inches tablet with waterproof body. The tablet is lightweight about 465 grams and has 6.9 millimeters thin. The design is excellent if compared with Apple iPads. If you are talking about Sony, then Bravia 2 Engine is build in for high quality video displaying. The images are much clearer then ever as the Retina Display are equipped to enhance the color of images. The tablet is already stuffed with WUXGA display and powered with Snapdragon S4 Pro processor with 1.5 GHz asynchronous quad-core CPU and 2 GB RAM.

Capture pictures through 8.1 Mega pixels rear camera that is having CMOS sensor and the EXMOR R. you can also enjoy shooting videos and playing them in tablet is worthy. As the device comes with surrounded sound 3D technology called as S-Force that actually works with NFC (Near Field Communication). This NFC technology helps to transfer the data by wirelessly that is high speed than Bluetooth.

The device comes in two ranges that are 16GB and other 32GB. It means shaving files is easy in Tablet Z. the color choosing is there where customers can go for exciting black or very cool white.