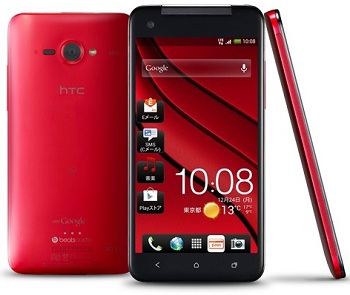 HTC ‘s J Butterfly (HTV31) smartphone has made its first appearance in Japan. The smartphone is now listed on the HTC’s Japanese site and also on the mobile carrier KDDI’s website. The smartphone sports a 5.2-inch QHD 1440×2560 pixels Super LCD3 display and is a water and dust resistant device with IPX5/ IPX7 and IP5X certification.  It has dimensions 151x73x10.7mm and weighs 162 grams.

For performance, the J Butterfly (HTV31) is powered by a 64-bit octa-core Qualcomm Snapdragon 810 MSM8994 (quad-core 2GHz + quad-core 1.5GHz) SoC. The handset comes equipped with 3GB of RAM. The smartphone offers 32GB built-in storage and can be expandable up to 200GB storage via microSD card, which is very huge. The HTC J Butterfly handset runs Android 5.0 Lollipop.

Talking on the camera, the device features a high quality 20.2-megapixel rear camera with dual-LED flash.  There is big treat for the selfie lovers, it has a 13-megapixel front-facing shooter. The HTC J Butterfly  also comes with the dual rear camera setup. The connectivity features of the smartphone include LTE, Bluetooth, Wi-Fi, GPS/ A-GPS, GPRS/ EDGE and 3G. The HTC J Butterfly is backed by a 2700mAh battery. The smartphone also features quick charging technology.

The pricing details of the HTC J Butterfly have not been revealed yet. There is no official statement fron the company about its global availability. We are expecting that the smartphone will be available soon in Japan for purchase and launched globally.

Sony has launched the Xperia A4 for the Japanese carrier NTT Docomo. It is currently available for pre-orders via NTT Docomo and will start shipping mid-June.  The Xperia A4 (SO-04G) will be offered in Grey, Pink, Blue and White colours. The Sony Xperia A4 comes with a 4.6-inch HD (720×1280 pixels) Triluminos display with X-Reality engine. The Xperia A4 gets IP65/IP68 ratings for dust-proof and waterproof certification. The smartphone has dimensions 128x66x9.1mm and weigh 129 grams. It has got proximity sensor, accelerometer, ambient light sensor and gyroscope. It is powered by a 2.5GHz quad-core Qualcomm Snapdragon 801 SoC with Adreno 330 GPU and comes with 2GB of RAM. The Xperia A4 runs Android 5.0 Lollipop out-of-the-box. The Sony smartphone offers internal storage of 16GB, which can be expanded upto 128GB via microSD card. The Sony Xperia Z4sports 20.7-megapixel rear camera with LED flash and Exmor RS sensor . It also has a 2.2-megapixel front facing camera. The device is backed by a 2600mAh battery.

HTC One A9 with Android Marshmallow launched