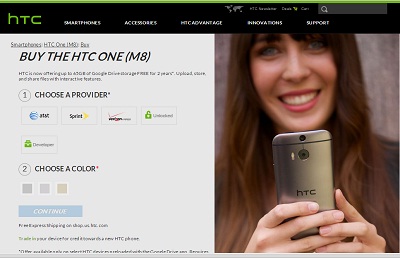 It’s a just couple of days ago when we informed you about the launch of the HTC One M8 Google Play edition and on the same day only the Taiwan-based manufacturer announced about the launch of a developer Edition of the device. And the company is too strong on committed to its commitment since the order page of Developer Edition is now available in the official website of HTC.

HTC rolls out Android 4.4.2 KitKat update for HTC One in…

Grab HTC One Free of Cost on Cyber Monday Deals

That day we had cast light on the varied specs and features of the HTC M8 Google Play Edition that went on sale the previous day (March 26) only whereas the Standard version went on sale on the very day of its launch. And the Developer Edition is now enlisted for sale and you can put your order right now at visiting the official website of HTC. In the previous article we had tried to bring you a crystal comparison between the specs of the Standard Model and the Google Play model of the HTC M8. And what we marked there the two devices matched a lot in hardware specs.

But the HTC One M8 Developer edition bit differs from the two. Unlike the Standard model the developer edition comes packed with an unlockable bootloader which will simplify your Smartphone usage. Among other specs, flagship model is equal to the Standard model since it is equipped with the same 1080p 5.0-inch Super LCD3 display, quad-core 2.3 GHz Snapdragon 801 processor,  Duo 4 MP UltraPixel Camera, 2 GB of RAM, 32 GB in-built storage, microSD card support up to 128 GB, HTC BoomSound, a 2,600 mAh battery etc.

From connectivity front, the Smartphone features Bluetooth 4.0, microUSB 2.0, 4G LTE, WiFi, NFC, and IR blaster etc. The device also runs on the same Android 4.2.2 kitKat OS and supports Sense 6.0, which will assist you to enjoy features like BlinkFeed, HTC Zoe, or Motion Launch. For the time the device is available Amber Gold and Gunmetal Gray colors at a price tag of $649. The Manufacturer reveals that the Developer Edition Smartphone will be shipped to the users within 1 to 2 weeks after they place their order.

Grab HTC One Free of Cost on Cyber Monday Deals

HTC One US Scheduled to receive Android 4.4 KitKat by January End