Micromax launches Canvas 4 Plus via amazon and infibeam 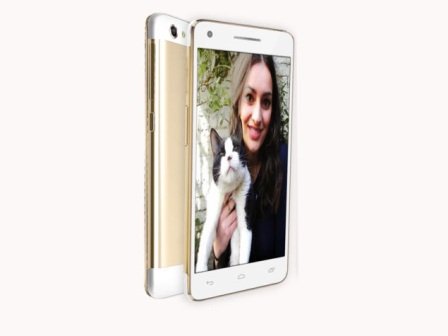 Micromax is all set up to launch a new smartphone, the Canvas 4 Plus. The smartphone is being offered in White and Gold colour variants.

The Canvas 4 plus features a 5-inch HD (720×1280 pixel) Amoled display .the Micromax Canvas 4 Plus has got support for dual-SIM (GSM+GSM)  . It is powered by a 1.7GHz octa-core MediaTek (MT6592) processor . The Canvas 4 Plus comes loades  with 1GB of RAM and Mali 450 GPU. The smartphone offers you  16GB of inbuilt storage which can be expandable upto 32 GB via micro SD card.

The Micromax Canvas 4 Pus runs Android 4.4.2 KitKat out-of-the-box. The smartphone has got  a 13-megapixel autofocus rear camera along with LED flash support . You also get is a 5-megapixel camera on the front to click high quality selfies.

The canvas 4 Plus comes with good connectivity features like Bluetooth, GPRS/ EDGE, GPS, 3G, Wi-Fi,  and Micro-USB.  The Micromax smartphone has got sensors like   proximity sensor, G-sensor and an ambient light sensor. The Canvas 4 Plus is backed by a 2000mAh battery.

Micromax has partnered with Google and has launched a  Android One smartphone ,the Micromax canvas A1 in India . The smartphone is being offered in Black and White colour variants exclusively via  e-commerce site Amazon. The Micromax android one smartphone has been priced at Rs. 6,499.  It is powered by a 1.3 Ghz  quad core MediaTek MT6582 processor.  It comes loaded with a 1GB RAM .The smartphone has FWVGA 4.5 inches capacitive touchscreen with 480 x 854 pixels resolution and 16M color support. The Android One phone sports a 5MP rear shooter . The camera has got special features like digital zoom, auto focus and LED flash .It can also record full HD videos in 1080p resolution and play high definition videos .The smartphone offers   4 GB of internal storage which can be expandable up to 32GB via microSD card. It currently runs on Android v.4.4.4 KitKat operating system which will be automatically updated to Android One. This smartphone is competing against the Android smartphones launched by Karbonn and Spice in India

The Micromax Canvas 4 Plus is available at Infibeam at Rs. 16,999, while  at eBay it has been priced at  Rs. 16,750. There is no official report about the official launch of the Canvas 4 Plus by Micromax .