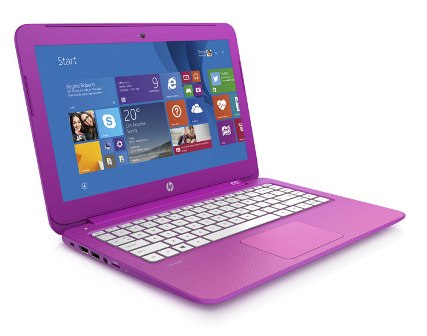 First taking a look on the HP Stream 7 and HP Stream 8 tablets, both the devices run on Windows 8.1 OS. These two tablets are powered by quad-core Intel processors. Unfortunately we do not have the HP the complete specifications for both the Stream tablets, but we have found out some specifications from a report. The report reveals that  the tablets are receiving  Intel Atom Z3735G quad-core processor. They are loaded with 1GB of RAM and they offer 32GB of inbuilt storage which is expandable via microSD card .

Both HP Stream 11 and HP Stream 13 laptops will be offered in Orchid Magenta and Horizon Blue colour variants.The HP Stream 11 sports  an 11.6-inch HD display and HP Stream 13 sports a 13.3-inch HD display. Both the laptops have  a touch display option. They are powered (via Engadget) by Intel Celeron N2840 SoCs . The laptops are loaded with Intel HD Graphics. The Stream 11 and Stream 12 come with  2GB of RAM and 32GB of eMMC flash memory. HP laptops come without a fan to ensure noiseless operation. The Stream laptops feature DTS studio sound which offers you rich quality audio.

The HP Stream 13 has a battery which, is credited to deliver up to 7 hours 45 minutes of battery life while, HP Stream 11’s battery is credited to deliver up to 8 hours and 15 minutes of battery life.Moreover. HP Stream laptops are being offered with  one year free subscription of Microsoft Office 365 Personal that  includes 1TB of OneDrive storage and a $25 (roughly Rs. 1,500) gift card for apps or games purchases from the Windows Store. The new HP Stream 11 is priced strating  at $199.99(roughly Rs. 12,300) while, the HP Stream 13 will be offered starting at $229.99 (roughly Rs. 14,100) .

Now it’s to be seen to what extend these newly released devices from HP are gaining popularity in the Indian market. HP has always sustained its brand name with its product value and we hope these four forthcoming devices will stand to the expectations of the manufacturer. But what you think readers? Share your valuable comments with us.