Royal Enfield, the trusted Bullet maker has finally launched the most awaited bike, the Himalayan in India today. Starting price of the bike starts from Rs. 1.5 lakh (Ex-showroom price in Mumbai) and it will be on road approx Rs. 1.78 lakh. But the people of Delhi will suffer the most for the bike as it’s not going to be launched there. As ensured by the company, the Himalayan is not BS4 compliant and hence will not be released in Delhi. However, it will be available in the Delhi NCR region where it’s price will be approx. Rs. 1.79 lakh. But the people of Delhi can have a look of it as it will be displayed there, but they can’t register. Basically, the Himalayan will be sold in the Delhi NCR’s such as Gurgaon, Faridabad, Ghaziabad and Noida.

Also Read: All about the new 2016 Toyota Innova

However, the company is busy working on a BS4 compliant and the company thinks of making it available by April 2017. The Himalayan is the first ever purpose built motorcycle that has been introduced by any Indian manufacturer. This bike will be helpful for the users who do like to take adventure tours on their Motorcycle. Here we must say that the Manufacturer took almost a month before selling the bike though it had already revealed the specifications a month before. So it’s obvious that you must have come across the specs of this new bike. Still we would like to repeat those once again to just make you recollect. 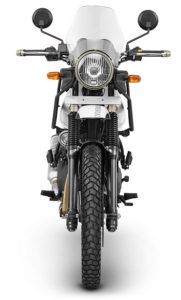 The Enfield Himalayan is powered by a 411cc air-cooled, single-cylinder engine that produces a powerful 24.5bhp at 6500rpm. Nothing to get worried by these figures since this engine is designed to cover more kilometres than winning races. I have also told you earlier that this Motorcycle is all about for adventures. Maximum Torque that the bike can churn is [email protected] In comparison to many other Royal Enfield bikes, the Himalayan also packs a very strong and smooth engine and the carbureted motor of the bike will not disappoint you if you are desperate to hear a bullet like sound.

Besides, the Royal Enfield Himalayan comes manufactured with 21-inch front and 17-inch rear dual purpose tyres front CEAT and is 2190mm long and 840mm width. Apart, it has a height of 1360mm and ground clearance of 220mm with 1465mm Wheelbase. The bike is a five gearer giant that supports new semi-digital & semi-analogue instrument cluster along with  a compass and gear indicator. The bike is going to be made available only in a couple of colors i.e. Snow and Granite. So you can choose the one that best suits your personality.

So if you are desperate to put hands on this just awesome giant, then contact your nearest Royal Enfield showroom today only.

Classic 650 in the works! When to launch and how much it will cost