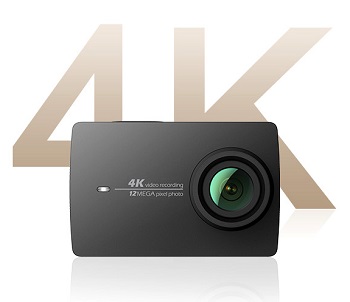 As expected, Xiamoi has finally revealed the YI 4K Action camera. This camera has the potential to record 4K video with crystal clear visibility that will take your visualization to the next level. This new camera Xiamoi is supposed to give steep competition to the GoPro Hero series and other action cameras. Brand named as YI 4K Action Camera, this device is supposed to create hullabaloo in the market because of its lacklustre visual and powerful specs.

Xiaomi has powered the camera with a 12 megapixel Sony IMX377 sensor, which is capable to record and shoot stills in even in native resolution. The sensor of the YI 4K action camera is a seven-layer lens having 155 degree field of view and f2.8 aperture. The device too comes packed with a six-axis gyroscope that allows for electronic image stabilization. This feature is quite unique as you will not find even in the GoPro Hero 4.

Other specifications of the camera includes dual band WiFi support ranging 2.4 and 5.0 GHz, Bluetooth 4.0, and a microSD slot. This camera is housed with a 2.19 inch LCD touchscreen which is being protected by a Corning Gorilla Glass. You will find the camera being empowered by a 1400mAh battery. The company claims that battery of the YI 4K is going to last longer than the battery of GoPro Hero 4. It’s claimed to record 4k footage up to 2 hours in one time charging. Isn’t it great?

For the time, the Xiaomi YI 4K camera will only be available in white, black, or rose gold color variants at a price tag of 1199 yuan. The company will launch this camera in China only, but one can grab it internationally from Gearbox for just for $249.  So what you think guys? Does this camera fit into your needs? If you are quite ok with the features of the Camera at the mentioned price tag, then why to waste time for! Just move ahead and grab it now.