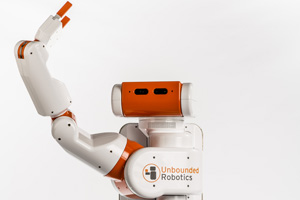 The development and innovation in robotics is increasing by leaps and bounds. We now have a robot named UBR-1 which has been developed by Unbounded Robotics situated in Santa Clara, California. Modern industries now use CNC machines which are completely automated with negligible human participation. These require a very high investment and also involve monetary risks, so instead of going for those machines, the UBR-1 bot can be used as an option for semi automation to increase the efficiency and rate of production with an affordable investment. The bot can also perform tasks in non human friendly environments.

The UBR-1 can be built in a single day.[highlight] The UBR 1 bot has a fourth generation Intel core i5 processor. It uses a version Ubuntu Linux and open source operating system. This helps to program a range of functions to the bot and make it multitasking and intelligent. [/highlight]The bot has Wifi connectivity, microphone speaker, laser scanner and prime sense 3D sensor for vision and intelligence. The UBR-1 has USB 3.0 expansion ports. The robot is 4 foot tall has one arm and weighs 160 pounds. It can operate continuously for 5 hours on a full charged battery. It travels with a speed of 2.23 miles per hour.

“We see the robot as doing tasks, they could be dull, they could be dirty, they could be dangerous and doing them repetitively all day in a light manufacturing environment. Those tasks include stocking shelves, picking up objects and assembling parts. There’s a real gap between full automation and no automation, We feel that this robot can be the solution, Unbounded Robotics is targeting companies that want some automation to speed up their manufacturing process, but can’t afford to fully automate their businesses. In five years, we hope to see the robot in many different businesses doing diverse tasks” said Melonee Wise, Unbounded Robotics CEO and co-founder.

[highlight]The Unbounded robotics is developing an app which can be used to program the robot directly by using its arm movements[/highlight]. Thus there would be no need of computer programming. The robots can perform tasks more efficiently than humans. They can work in isolation or can assist the human workers in a safe manner.

Google launches Chrome 35 and a Gmail update for Android