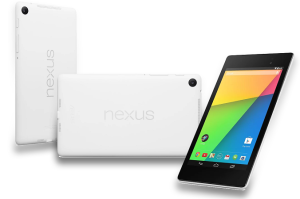 Are you a Nexus 7 lover? Do you love the white variant of Nexus 7? Then we have great news for you as Google has enlisted the White Nexus 7 2013 Smartphone in Play Store, the previous day. Now you can directly place your order for the 32GB variant of the Nexus 7 2013 WiFi only model from the Google Play Store at a price tag of $269. However, the device is now available only in Panda White color and the White Livery model is out of stock for the time being.

Before enlisting the White Nexus 7 2013 WiFi only model, Google had also enlisted some other devices such as the Xperia Z Ultra & the Google Play Edition of the G Pad 8.3 tablet in the Play Store yesterday. The White nexus 7 2013 for the time is available only in Panda White color with a black front panel in the US, UK and Japan Google Play Stores and the device will be shipped within a couple of days since you place your order.

Turning to the technical specs of the device, the Smartphone sports a 7 inch LED backlit IPS LCD display with a resolution of 1920×1200 pixels. The device might come pre-loaded with the Android 4.2.2 Jelly Bean or Android 4.4 KitKat Operating System. But even if the device comes pre-installed with Android 4.2.2, there is nothing to worry since you can update it to Android 4.4 just after unpacking the device. Apart,, the Smartphone is powered by a quad-core Snapdragon S4 Pro processor and supports 2GB of RAM. For enhanced storage space, it supports 32GB in-built memory and holds a 5MP rear camera to provide the users with smart cam experience. For durable power performance, it packs a 3,950 mAh battery.

So, is there any amongst you who is desperate to grab one Nexus 7 32GB WiFi-Only 2013 White model Smartphone? Or you are interested to grab a black model of the device? Then you have to wait a few more days, since the black model will also be enlisted in the Play Store and with the same price and same configurations.

Audi Introduces Sedan A3 in South Africa, Likely to Launch in India the Following Year