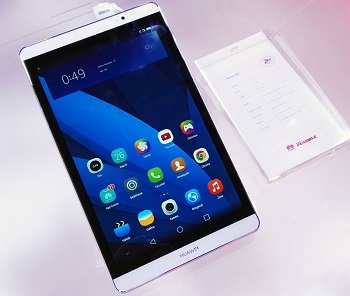 Huawei has launched its new MediaPad M2 tablet in France. The newly launched Huawei MediaPad M2.It sports an 8 inch display with 1920 x 1200 pixels. The tablet is 7.8mm thin and weighs 310 grams. It is powered by a 64-bit 2GHz Kirin 930 octa-core processor coupled with a Mali-T628 GPU. It comes with 2GB of RAM and includes 16GB of built-in storage further expandable via microSD card. The Huawei device runs Android Lollipop OS with Emotiion UI 3.0 on top.

The Huawei MediaPad M2 features an 8-megapixel rear camera with LED flash, there is a 2-megapixel front facing shooter for making video calls. The MediaPad M2 is packed with a 4800mAh battery. The connectivity features of the tablet include 4G LTE, Bluetooth, Wi-Fi, GPS and Micro USB. The sensors included are accelerometer, proximity sensor and compass.The tablet has been priced at EUR 349 (roughly Rs. 25,000) . It is expected to reach the stores starting in the month of June. Currently, we have no official reports on the global availability of the MediaPad M2.

Huawei had launched two new smartphones in India, the Honor Bee and the Honor 4C last week. The Honor Bee sports a 4.5-inch (480×854 pixel) display. It runs Android 4.4 KitKat with Huawei EMUI 3.0 Lite. It is powered by a 1.2GHz quad-core SC7731 Cortex-A7 processor coupled with 1GB of RAM. It offers 8GB of built-in storage that’s expandable up to 32 GB via microSD card. It features an 8-megapixel rear autofocus camera along with 2-megapixel front-facing camera. It is powered by a 1730mAh battery. It is priced at Rs 4,999. It is a decent budget friendly smartphone.

The Honor 4C features a 5-inch HD TFT IPS display. It is powered by a 64-bit 1.2GHz octa-core HiSilicon Kirin 620 processor coupled with 2GB of RAM. It offers a 8GB of inbuilt storage, which is expandable via up to 32 GB via microSD card. It is dual-SIM dual standby device. The handset runs Android 4.4.2 KitKat with Emotion UI 3.0. It sports 13-megapixel rear autofocus camera with LED flash, there is a  5-megapixel front camera for selfie lovers. The Honor 4C is backed by a 2550mAh battery. It is priced at Rs 8,999.