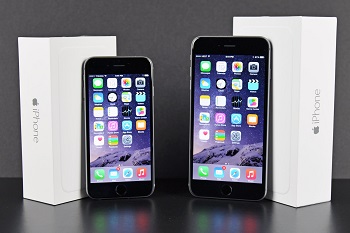 Apple has again tipped to the top of the list in selling Smartphones. Yes, Apple has broken it’s own record of 10 Million Sell over the first weekend during the launch of its much anticipated Smartphones iPhone 6 & iPhone 6 Plus. Now Apple has out-topped its own benchmark by selling 13 million iPhone 6s and iPhone 6s Plus Smartphones in the first weekend of their launch and that within just three days. Apple had launched the two Smartphones in a few countries in Australia, Canada, China, France, Germany, Hong Kong, Japan, New Zealand, Puerto Rico, Singapore, the UK, and the US as a trial earlier this month in four color variants i.e. Silver, Gold, Space Grey, and a new Rose Gold Aluminium finish. Post successful selling of the iPhone 6s and iPhone 6s Plus handsets in the above mentioned countries, now Apple has thought of moving forward to the second segment of sell. As a next step, Apple has declared to launch the iPhone 6s and iPhone 6s Plus Smartphones across the globe in three different dates i.e. October 9, October 10 and October 16. As a primary estimation, on October 9 the handsets are going to be on sell in more than 40 countries including Andorra, Austria, Belgium, Bosnia, Bulgaria, Croatia, Czech Republic, Denmark, Estonia, Finland, Greece, Greenland, Hungary, Iceland, Ireland, Isle of Man, Italy, Latvia, Liechtenstein, Lithuania, Luxembourg, Maldives, Mexico, Monaco, Netherlands, Norway, Poland, Portugal, Romania, Russia, Slovakia, Slovenia, Spain, Sweden, Switzerland and Taiwan.

iPhone 15 might be the next big phone from Apple, the leaks…

Similarly, on October 10 the handsets will be on sell in Bahrain, Jordan, Kuwait, Qatar, Saudi Arabia, and United Arab Emirates and on October 16, the iPhone 6s and iPhone 6s Plus will go on sell  in India, Malaysia and Turkey. Similarly, the company plans to sell the handsets in more than  130 countries by the end of this year which is definitely a huge target to meet.

Those who have already not much idea about the iPhone 6s and iPhone 6s Plus, the iPhone 6s features a 5.50-inch display with  1080×1920 pixels resolution, is powered by a Dual-core 1.84 GHz GPU with an Apple A9 chipset, supports 12MP Primary and 5MP secondary camera, 2 GB RAM with 16/64/128 GB built-in memory and many more features. Similarly, the iPhone 6s Plus packs a 5.5 inch LED-backlit IPS LCD capacitive touchscreen with 16M colors and 1080 x 1920 pixels resolution, Apple iOS 9 OS, is powered by a Dual-core 1.84 GHz processor, supports 2GB RAM, 16/64/128 GB internal memory, one 12 MP rear camera and 5MP secondary camera and many other features. All other feature details you can get from the official website of Apple.

So what you think guys? Are you ready to test the taste of the Apple iPhone 6s and iPhone 6s Plus. Then cross your fingers for October 16th.

Why iPhone is so expensive in India, Know the background factor