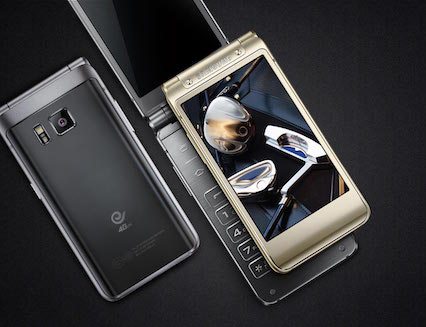 We all love flip phones, few years back Motorola and Samsung Flip Phones were very popular. These phones were stylish and fun to use. Samsung has come up with a new flip smartphone. It is the Samsung W2016. The smartphone has been launched in China and comes loaded with great looks and  high end features.

You will get two Display screens in this Flip smartphone from Samsung. The metal and glass sculpted device sports one 3.9-inch WXGA (768×1280 pixels) resolution Super Amoled touchscreen on the inside and a similar one on the outside of the the handset. The new flip phone has dimensions 120.4x61x15.1mm and weighs 204 grams. Apart from these two touch screens, the smartphone also boasts a T9 physical keyboard. The new Samsung Flip smarphone gets the power from  a 2000mAh battery. The battery is supported by fast-charging. The smartphone can be charge up to 50 percent in just 30 minutes with this technology.

There is not just style in this new Flip phone but there is power too. You can flaunt its stylish design as well as its seamless performance with its hardware. The Samsung W2016 works on the Android 5.1 Lollipop OS with  TouchWiz Skin on top. The Samsung W2016 is powered by an 1.5Ghz octa-core processor. The smartphone comes with a mighty 3GB of RAM. There is more than enough space for storing apps, documents, photos, videos, music and much more with the  64GB of inbuilt storage. There is no expandable capacity available for the internal storage.

The Samsung flip phone won’t disappoint you in the camera section too. The Samsung smartphone features a 16-megapixel rear camera with LED flash to deliver high quality and crisp images. There is also a 5-megapixel front-facing shooter for clicking selfies and making video calls. The connectivity features of the Samsung Flip phone include Bluetooth, 4G LTE, Wi-Fi, GPS, GLONASS, 3G, 2G and Micro-USB. It is a Dual SIM supporting device.

The Samsung flip phone has made its appearance on Samsung’s China site. Sadly, we don’t have any official reports about the global availability and pricing.

The Pepsi Phone P1s and Phone P1 have been launched in China via jd.com. They sport a 5.5-inch 2.5D curved display with a resolution of 1080×1920 pixels. A big 3000mAh battery fuels the smartphones and keeps them alive. The smartphones work on dido OS 6.1 version based on Android 5.1 Lollipop. The Phone P1s and P1 are driven by a 1.7GHz octa-core MediaTek (MT6592) processor. They come loaded 2GB of LPDDR3 RAM. The handsets offer 16GB inbuilt storage, which can be expandable up to 64GB  via microSD card. The gadgets come featured with a 13-megapixel camera on the back. There is a 5-megapixel front facing shooter too