Symphony Roar A50 Android One smartphone launched in Bangladesh 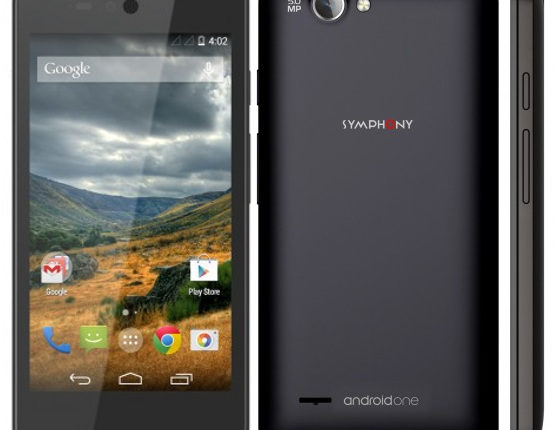 The Symphony Roar A50 smartphone sports a 4.5-inch (480×854 pixels) IPS FWVGA display. The Android One handset is powered by a 1.3GHz quad-core MediaTek processor. It features 1GB of RAM. To serve the photography requirements the handset sports a 5-megapixel rear camera with LED flash. There is a 2-megapixel front facing camera for selfie lovers. The Symphony Roar A50 offers 8GB of inbuilt storage which is expandable upto 32 GB via microSD card. The connectivity options available on the phone are Wi-Fi, GPS, GPRS/ EDGE, 3G, and Bluetooth. It is backed by a 1780mAh battery.

The Symphony Roar A50 is the first Android One smartphone launched  by any manufacturer outside India. Karbonn Mobiles had launched the Sparkle V in the UK at GBP 129.99 (approximately Rs. 12,600) via Amazon UK last month. As we see the Symphony Roar A50 comes has design and specifications as seen on the Karbonn Sparkle V, Micromax Canvas A1, and Spice Dream Uno Android One handsets launched in India in the month of September.

Google had launched the all new Android One phones in India. At the launch, Google said that Android One would offer the new material design, improved battery life, enhanced security features, and smarter notifications. India isthe first country to receive Android One.  Android One is a Google programme where it is partnering with phone companies to create high-quality but low-cost Android smartphone. The Android One is completely designed by Google. The Android One could not make much impact in the Indian market due to stiff competition from other mobile brands.

Spice had launched a model of its Dream Uno Android One smartphone, called the Dream Uno H. The smartphone comes with complete Hindi language support. India has 300 million Hindi Speaking people and Spice said that the dual-SIM Dream Uno H has been designed for them. The Spice Dream Uno H is targeted at Hindi Speaking people has a complete Hindi keyboard along with voice input and Hindi versions of Google apps like Google Search, Google Chrome, YouTube, Google Maps and many more. The Spice Dream Uno H has been priced at Rs. 6,499.

Suzuki launches all new Alto Kei with a mileage of 37kmpl