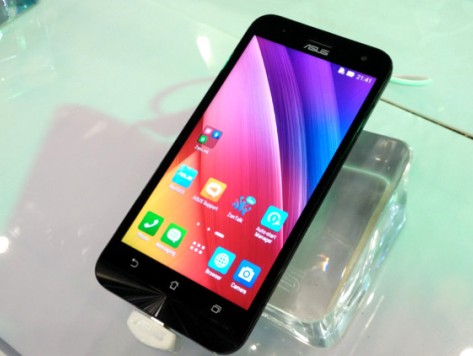 Asus Zenfone 2 Laser 5.5 and Asus Vivobook 4K have been launched in India.

The ZenFone 2 Laser (ZE550KL) owns a 5.5-inch HD (720×1280 pixels) IPS display on the front. The smartphone is guarded by  Corning Gorilla Glass 4 to prevent scatches and give a long lasting new look to the smartphone. The smartphone has got dimensions measuring 152.5×77.2×10.8mm and weighs 170 grams. Asus ZenFone 2 Laser 5.5 handset will be offered to its customers in 3 shades Red, Black and White. The handset gets its fuel to run from a 3000mAh battery.

The  Asus ZenFone 2 Laser works on the Android 5.0 . Lollipop. The smartphone is powered by a mighty Octa core Snapdragon 615 processor Adreno 405 GPU. The storage can be expanded upto a maximum 128Gb via microSD card. The 3GB of RAM would definitely give smooth and fast performance to the users. Play games and surf internet without any hiccups with the powerful hardware loaded gadget. Your apps, songs, videos and pictures will find themselves a place in 16GB of built-in storage in the device.

The camera features feel the same as in any other smartphone in this price range. It sports a 13-megapixel camera with laser autofocus and Real Tone Flash on the back. It also houses  a 5-megapixel front camera for making video calls and clicking selfies. The connectivity featuring in the handset include with 4G LTE support, dual-SIM connectivity, Bluetooth, Wi-Fi, Micro USB and GPS.

The Asus ZenFone 2 Laser 5.5 is being offered at a price of Rs. 13,999. The smartphone can be purchased now through e-commerce website Flipkart.

The Asus VivoBook 4K, boasts a 4K/ UHD (3840×2160 pixel) IPS display. The laptop Weighs  around 2.3kg, The ASUS Vivobook  cwill be offered  in Icicle Gold, Glacier Grey, Black, and Navy Blue colour options. The Vivobook is backed by a 2-cell 37Whr battery. The pricing details have not been revealed to us.

Customers will also get a lot of connectivity options like 2 USB 3.0 ports, 1 USB 2.0 port, HDMI port and card reader.